Read here to Get the Best software to convert your videos from Blu-ray to .m4v easily and fast! Try it and detailed how-to.

Currently, M4V becomes increasingly popular as a high definition video format, which was developed by Apple Inc. This type of file allows users to produce HD video without sacrificing file size. Sometimes you may want to convert Blu-ray files on Mac to a more universal format that’s playable on iTunes, Apple QuickTime Player and iOS devices.

Under these circumstances, most people opt to convert Blu-ray to M4V. You can check below to learn the most effective solution.

To do this, you simply need a Blu-ray Ripper. I have tried many converters from the web. They are either poping up ads or working poor. But Brorsoft Blu-ray Ripper for Mac do a great job with a fast conversion speed. As a clean and simple tool, it is capable of converting all Blu-ray and DVD files including Blu-ray to M4V, Blu-ray ISO to MP4, DVD to MOV, DVD to WMV, Video_TS to MKV, MPEG-2, Ogg Theora formats. And it comes with a group of presets to tailor your conversion for favorite devices such as iPhone, iPad, Android phone, Surface, Xbox One.

If you want to convert videos from Blu-ray to M4V on a PC’s, please use its Windows version.

How to Rip Blu-ray to M4V, DVD to M4V format Playback

Insert your Blu-ray into driver, and add your Blu-ray disc via “Load” button to the app. This program also supports DVD discs and DVD/BD folder.

Click on the dropdown menu of “Format” and then move your pointer to “Common”. Under the sublist, you can find the “H.264 Video(*.mp4)”, “M4V – MPEG-4 Video(*.m4v)” which are both the perfect formats for you to put Blu-ray video onto iTunes/iPhone/iPad for playback. 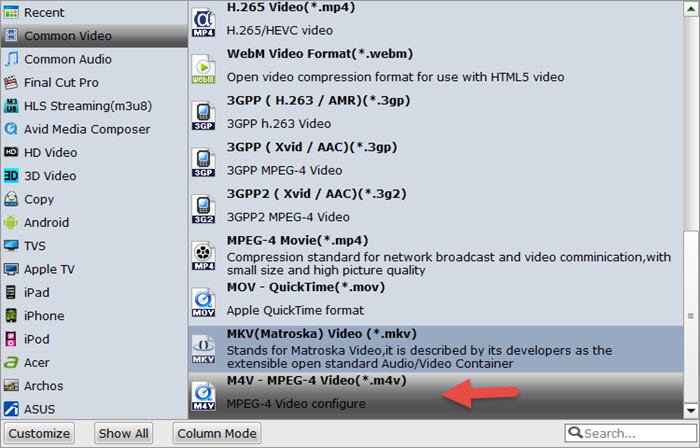 If you need, you can also click “Settings” to modify parameters of your output profile to meet your professional needs: bit rate, frame rate, aspect ratio, etc.

You can even use its provided Edit feature to edit your output video by cropping, adding watermarks, trimming and setting 3D effect so on.

The final step is to tap the Convert button and commence converting Blu-ray or DVD movies to M4V format files.